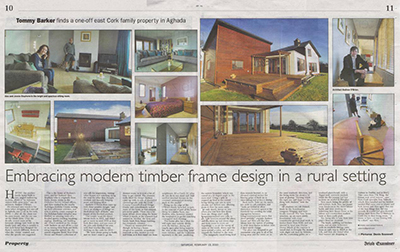 He returned very much to his roots when designing this one-off in Aghada, east Cork in the early 2000s — after all, the client was his sister Jennie, and the site was on the family farm. Over the decade, several more of his fortunate siblings have built on the family land, and what is notable is that each house he’s designed for them is entirely different, down to what the ‘clients’ wanted, and what the specific site suggested.

This is the home of Andrew’s sister, and her husband Alex Stephens who is originally from Essex. Jennie works in the Ordnance Survey Ireland offices, and Alex worked in the nearby Trabolgan Holiday Centre, setting up their adventure activities, and now is activity centre manager at the Ballyhass Lakes complex near Mallow, an amazing reuse of a flooded quarry, yielding kayaking, angling, abseiling, raft building etc. They’d worked on the design with Andrew on and off for a year or so, tossing ideas back and forth, using magazine spreads like the annual magazine Build Your Own House and Home’s collection of one-offs for inspiration, visiting other houses and watching along the road for what they thought worked, and basically keeping aware and honing ideas.

Andrew O’Brien then came up with three possible designs “and this is an amalgam of things we liked about each of them,” says Jennie of the finished product.

The couple went the direct labour route in 2003, and didn’t get to move in until 2005 as they took their time, and says some of the jobs only finished last year, with final touches like extra decking on the cards for 2010.

“We were always going to build, and we didn’t want to go the dormer route, so it took a bit of time to get started. The planners really liked the design Andrew came up with (it sort of dovetailed chronologically with the Cork County Council’s Rural Design Guide, and coincidentally ticked many of the boxes in that seminal, pro-active guide. There was a bit more debate about siting the house where it stands, as the planners had wanted to ‘sterilise’ the farm and family lands from future building, but eventually relented.

There’s an unintended irony though, in having a house designed in naturally sympathetic materials as this, modest in scale and form, as it does stand out from neighbours. It’s a Catch 22: what do you do to not stand out? Add another standard dormer to the country’s oversupplied housing stock to this model?

Being on the edge of the O’Brien family farm led, in part, to the concept of part of the house liking to a timber barn, says Andrew, who, however, resisted the temptation to go for matching corrugated steel sheeting.

This house plan has a clear day and night time activity divide, with the kitchen, dining and largely open-plan living zones to the west of the connecting ‘joint’ main entrance, and the bedrooms separately to the east, paralleling the eastern boundary which was canted at a 60 degree angle to the main road. Using a split or stepped-up level at the central living/dining core sets its own identity and defines uses, allowing them to flow far more easily.

It only slowly dawns on you when you visit how few doors there are, things aren’t really compartmentalised into cells, so the light bounces around the place, and the views up and down steps and from room to room are beguiling — as are the sweep of views to the south, down over the farm toward a valley, and off over towards the harbour to the west.

The marginally raised living level then extends beyond, to an elevated external terrace for bracing gulps of fresh air in view-taking and al fresco dining.

Back inside, links are via spaces too wide to call corridors, and “walls are folded to allow distinction between spaces at the threshold but avoiding the solid segregation between living/entertainment spaces that doors provide,” explains Andrew. Jennie and Alex add that they always have the option of putting in wide door frames in future years if their needs change. 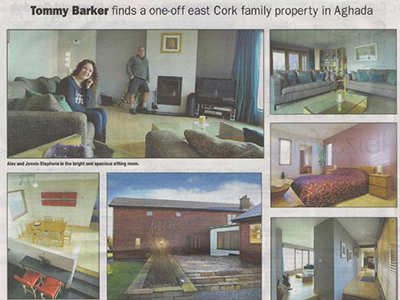 The place was designed to get maximum solar gain to all of the living areas and the views are in the same southerly direction, and the living room has about a 16’ span of glazing. “Getting winds the right size and shape is a big thing with Andrew,” note the couple.

All windows are oak framed, made by the Scandinavian company Vrogum, and were locally sourced. The basic house structure, up on super-sturdy foundations with some considerable ground dead work, is timber frame from IGM, and was erected by local man Declan Devoy. Much of the exterior is wood clad, in Douglas Fir, treated with alight oak stain by Sikkens, adn the contrasting gables are a rendered plasterboard, with a Tegral roof, unevenly pitched, while the flat joining and box sections are roofed in fibreglass.

Very much fitting the profile of self-builders, both Alex and Jennie were hands-on in the direct labour build, and were working on delivering their dream home as the labour and construction markets were at their costly peak.

Yet, being able to take their time paid a financial dividend.

The brash, uplifting red kitchen units, and en suite bedroom’s walk-in-wardrobe fittings came from an early trip to IKEA in the UK, and they also found what they wanted sale shopping in Habitat in Dublin, and in B&Q. Tiles came from Tile King, the feature teak spiral staircase came from Cork specialist firm Talitech, which Alex installed and his brother brother Phil came over to plaster and both Jennie and Alex agree that one of the best things they did was recently fit a solid fuel glass-fronted Stovax stove from Flor O’Mahony in Cork city in their living room: ” it seems to have cut our heating bills by a third,” says Alex.

Page load link
We use cookies on our website to give you the most relevant experience by remembering your preferences and repeat visits. By clicking “Accept All”, you consent to the use of ALL the cookies. However, you may visit "Cookie Settings" to provide a controlled consent.
Cookie SettingsAccept All
Manage consent

This website uses cookies to improve your experience while you navigate through the website. Out of these, the cookies that are categorized as necessary are stored on your browser as they are essential for the working of basic functionalities of the website. We also use third-party cookies that help us analyze and understand how you use this website. These cookies will be stored in your browser only with your consent. You also have the option to opt-out of these cookies. But opting out of some of these cookies may affect your browsing experience.
Necessary Always Enabled
Necessary cookies are absolutely essential for the website to function properly. These cookies ensure basic functionalities and security features of the website, anonymously.
SAVE & ACCEPT
Powered by